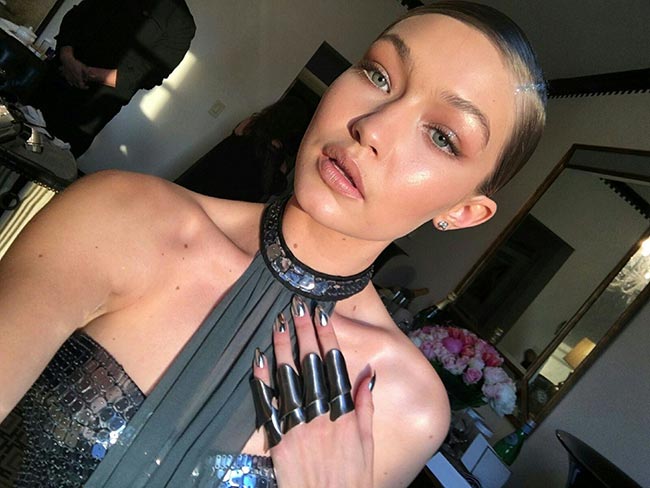 It’s an annual event that has celebrities putting serious effort to wow us all at the red carpet. This often involves hours of pre-event preparations and dress fittings at the last minute as the celebs go all out for the MET gala.

The event this year had a Manus X Machina theme and dressing centered on Fashion in an Age of Technology. That being the case, most of the celebrities in attendance had on cool yet quirky and futuristic gowns that were nothing short of attention grabbing.

The star of the evening was none other than young supermodel Gigi Hadid who stole the spotlight with her perfect outfit and accessories. Gigi had on an icy metallic dress fit for Wonder Woman that was done by fashion heavyweight Tommy Hilfiger. The dress was dazzling but the bit that everyone still can’t get enough of is the chrome manicure she had on that had customized crystals embedded under each of the nails. The crystals, three under each nail, were added as an element of surprise according to the nail stylist to ensure the look appeared flawless regardless of the angle of view.

The nail care expert who did the manicure is none other than celebrity nail stylist Mar y Soul. Based in New York City, Mar y Soul Inzerillo designed and did Gigi Hadid’s nails in chrome so that it would accompany the robot-inspired gown she had for the gala. The almond shaped chrome nails were created by KISS Nails, whose spokesperson, Amanda Reinstein, said the three crystals under each nail made the price spike to a shocking $2000.

Despite the hefty price tag for the wowing nail work, Inzerillo insists that the time and effort she had to put into the flawless look should have made the price tag go higher than $2000.

Mar y Soul is 30 years old and has had the opportunity to work with Gigi Hadid on previous occasions. Among these, the most notable have been the MTV Movie Awards as well as the supermodel’s recent advert for giant German auto maker BMW. The nail stylist recalls the first time she met Gigi was at one of the first magazine cover photo shoots right around the time she was 17 years old.

The two are currently as close as sister according to Inzerillo with their most recent hang out being when they spent the weekend in Las Vegas for Hadid’s birthday. And you would definitely believe her given the way she muses about how it has been to watch the 21-year old model grow from a new face in the industry to being a star.

Gigi had more to show off on the night of the Met Gala red carpet other than the titillating nail work though. The supermodel was in the company of her beau Zayn Malik who also got the memo on tech inspired fashion for the night. Malik opted to put his money on a stunning Versace suit that was custom fit with metal sleeves making him come off as a stylish Ironman and James Bond combination. The two stars matched each other’s outfits flawlessly and chose the perfect event to make their couple debut on the red carpet as they showed the world some public displays of affection.

Recreating the Costly Nail Look for $10

Gigi Hadid’s futuristic fingers that featured chrome knuckles blew minds on the night of the gala and had social media abuzz as soon as the price tag was made public. And ever since the internet broke over the pricy nails, there has been serious effort to recreate the look but at a more affordable cost. Popular culture new site Refinery29 was first to put out information that online store Born Pretty had come out with a nail polish that emulates Hadid’s Met Gala nails.

The nail polish from the Born Pretty store sells for $9.99 and has the same reflective effect as the expensive chrome pieces. It also lasts for around 1 to 2 days which makes it perfect for the one off major events like the Met Gala.

There have been great efforts to reprise the out-of-this-world manicure Gigi Hadid had on for the Met Gala. And that’s no surprise as it matched perfectly with the model’s gown as well as with her accompanying beau. Fortunately for the rest of us, the affordable nail care alternatives are available to give us the same feel even though the precious pricey crystals aren’t included.

Things You Should Know About TVS Jupiter