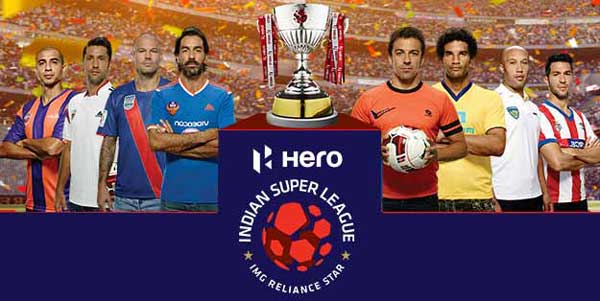 Founded in the year 2013, Indian Super League is the biggest professional football league in India. With popular teams, like Atletico de Kolkata, Chennaiyin FC, Mumbai City FC, and popular national and international players, like Diego Forlan, Bernard Mendy, Sunil Chhetri, Jackichand Singh, among others, the football league surely packs a lot of punch for the football lovers in India.

Indian Super League was founded in the year 2013 and its inaugural season began in 2014. The league has a total of eight teams which represent different parts of the country. Every team is allowed to have a total of 25 players on their roster, out of which maximum of 11 players can be from foreign countries, a league-approved marquee player, and the remaining should be domestic players from the country.

The eight teams of the Indian Super League are as follows-

With Alexandre Guimaraes as the head coach, players like Diego Forlan and Jackichand Singh, and popular actor Ranbir Kapoor as the co-owner, Mumbai City FC is one of the most popular teams in the Indian Super League. While the team has some of the best players in the league, they didn’t perform as expected in the 2014 and 2015 season of the league which resulted in Nicholas Anelka stepping down as the head coach and being replaced by Guimaeraes for the 2016 edition.

Under Antonio Lopez Habas, Atletico de Kolkata won the inaugural season of the league by beating Kerala Blasters in the final. Atletico de Kolkata News of Habas stepping down as the head coach of the team after the 2015 season came as a surprise for the followers of the team, especially after the team already won the league in 2014 and was in the semi-finals of 2015 season.

Chennaiyin FC won the 2015 season of Indian Super League by defeating FC Goa in the finals. The team is co-owned by actor Abhishek Bachchan and cricketer Mahendra Singh Dhoni. Marco Materazzi, World Cup-winning defender from Italy, is the head coach of the team since 2014. For the 2016 season, the team has retained players, like Jayesh Rane, Thoi Singh, Jeje Lalpekhlua and Harmanjot Khabra from the previous season.

While Delhi Dynamos FC failed to reach the semi-finals in 2014, they did so in the 2015 season but failed to enter the finals. In the year 2014, Delhi Dynamos signed legendary Italian forward, Alessandro Del Piero. Then in 2015, it signed Roberto Carlos as the team’s Manager and signed players, like Anas Edathodika and Robin Singh, who still play for the team.

NorthEast United FC represents a total of 8 different states of India and is owned by Bollywood Actor, John Abraham. While the team was at the 8th spot in 2014, they managed to reach the 5th spot in 2015. Nicholas Velez, Seityasen Singh, and Emiliano Alfaro are some of the most popular players in the team. Cesar Farias was the coach of the team in 2015 and was replaced by Nelo Vingada for the 2016 season.

FC Goa is owned by the Goan Football Club Pvt. Ltd., which consists of Virat Kohli, a popular Indian cricket player. Football is the official sport of Goa and a lot was expected from FC Goa since the inception of Indian Super League. The team managed to enter the semi-finals in 2014 and was runner-up in 2015. Zico, a popular Brazilian footballer, is the head coach of the team since 2014. Reinaldo, Miroslav Slepicka, and Rafael Coelho are some of the most popular players of Goa FC.

Popular former Indian cricket player, Sachin Tendulkar founded Kerala Blasters FC along with Prasad Potluri in 2014. David James was signed as the head coach of the team for 2014 season and was replaced by Peter Taylor in 2015. Currently, Steve Coppell is the head coach of the team, which is made up of players, like C.K.Vineeth, Antonio German, and Chris Dagnall. While the team was runner-up in 2014, it did not qualify for the semi-finals in 2015.

FC Pune City failed to live up to the expectations of the supporters during the 2014 and 2015 season. The team is owned by Rajesh Wadhawan Group and Bollywood actor Hrithik Roshan co-owns the team. Antonio Lopez Habas who was the head coach of Atletico de Kolkata in 2014 and 2015 is now the head coach of FC Pune City. The team has some great players, like Kalu Uche, Kostas Katsouranis, and Adrian Mutu, and is expected to make a comeback in the 2016 season.

These are the eight teams that make Indian Super League. With some of the best coaches, foreign and domestic players, and popular owners and co-owners, the league is doing an excellent job of making football a popular sport in the country and increase the participation of India in football all over the world. If you are new to the world of Indian Super League, go through the latest Atletico de Kolkata News and other clubs news to catch the action that you might be missing.