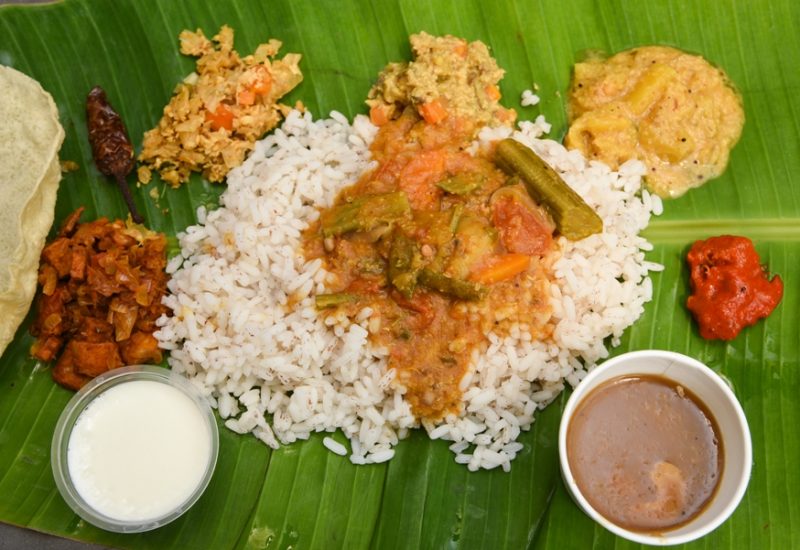 All About Tamil Cuisine

Tamil cuisine has incredible variety and is not limited to Sambar and Dosa. The versatility of the cuisine is an indication of the meeting of various cultures. Food items differ as per communities- be it Iyengars, Chettinad, Arcot or Kongunadu. But all types of dishes are sure to leave you enticed.

Tamil cuisine plays a symphony of taste on the palate from fresh turmeric to tangy tamarind to pungent chili pods and crispy fried curry leaves. A special item is the Mulligatawny soup which is the corrupted version of Tamil word- MulaguTanni or Pepper water.

The cuisine of South India is very different from North Indian cuisine. It is much lighter, spicier and featuring lots of vegetables and sea-food. Rice is a staple and the common variety in use is the Ponni rice- a fluffy, short grained variety.  Few cuisines make such creative use of lentils and rice than Tamil. Many dishes also feature tamarind and turmeric. Seafood is king in coastal regions and items like prawns, squids and fish are amply available.

The authentic source of Tamil cuisine is that of the Tamil Brahmin community of Iyengars.  Its roots spring from traditional practice of preparing food for gods and distributing to devotees in temples. The meal which is a purely vegetarian fare served on banana leaves and is referred to as ‘ElaiShappaddu” meaning meal on a leaf. Shappadu is a full course meal, which caters to all six tastes: astringent, pungent, salty, bitter, sour and sweet.

The star attraction of South Indian cuisine, the Sambar which is made in Tamil Nadu is different from that of other South Indian regions. It is thicker and tangier and contains more of local vegetables like drumsticks, pumpkins and brinjals as well as lentils. It has a unique aroma and flavour which is derived by adding heeng or asafoetida.

Chettinadcuisine is also very famous and popular for use of spices. The Chettiars were spice merchants of yore who traveled around the worldand brought home exotic varieties. Spices like Marathi Moggu(tastes like pepper and mustard) and Kalpasi flowers which are rare spices are used in this cuisine.

Tamil cuisine is much inspired by various influences. Angayapodi is a delicious blend of spices like pepper, ginger, toor dal, cumin seeds, black gram, Bengal gram and coriander leaves. It was created in the royal kitchens of Cholas and Pandyas. When consumed with ghee and hot rice, it helps in digestion. The use of sesame oil in Tamil recipes is attributed to the influence of the Sangam period. The baking of flaky puff pastry is attributed to the influence of French cuisine in areas around Coimbatore.

The Konganaducuisine derives its distinct flavours from use of roasted turmeric, milk and dry coconut in curries. The impact of traditional festivals is very notable. The Tamil New Year or Pongalcelebrations have resulted in dishes like venpongal in Tamil cuisine. For making Pongal, rice is cooked very gently in a pot along with milk and water till boiling liquids forms frothy, viscous bubbles, which rise above the pot. The Pongal thus features a top, creamy layer.

Food from Arcot region of Tamil Nadu also has distinct qualities. It features rustic flavours in comparison to the rest of Tamil cuisine which is more refined. The famous fare from this region includes dishes like Arcot Biryani and Arcot Mutton Chops. Arcot Biryani is made by using Seeraga Samba rice which resembles Arborio rice used to make Italian Risotto. This biryani, unlike the Hyderabadi version consists of preparing meat and rice separately.

These are some of the features of Tamil cuisine.

Things One Must Know About Commercial Fridges